Portable generators supply power where you need it and when you need it, and may serve as a temporary source of power in an emergency. Recreational applications might include RVing, camping, cookouts and outdoor events. There are also construction applications where electrical power is not available at the work site. A portable generator may also provide emergency power during a power outage if necessary.

The tools used in construction utilize electric motors to do the work, and electric motors have special power requirements. When a motor starts, it uses up to six times the rated power for one and half to three seconds. A generator starting that motor must be capable of supplying the motor’s inrush current during startup. If multiple tools will operate from the generator at the same time, consider the starting current of each motor.

Power tool motors fall into two categories: the universal motor and the capacitor start motor. Universal motors power easy to start loads such as electric drills, circular saws, disc grinders and jig saws. The number of starting watts for each tool is approximately double the number of run watts. Each tool has a nameplate marked with the voltage and the amps. Multiply amps by volts for watts, then double the number of watts to determine starting watts.

If other tools will operate at the same time, calculate the starting watts of the largest piece of equipment, then use the running watts of the smaller loads and add them together, along with the

Example: A construction site has two workers using circular saws and a 1 hp air compressor. The compressor runs at 1200 watts, but needs 7200 watts to start. The two saws run at 1500 watts and need 4500 watts each to start. If the workers take care to never start two tools at the same time, a generator with a 10,200 watt capacity is sufficient for all three tools. A generator sized for a higher load will offer greater flexibility and the workers won’t worry about starting two tools at the same time.

Sizing Generators for Recreational or Emergency Use

The loads supplied by a portable generator for recreational use are either resistive loads or motor loads. Small motors for window fans, grill rotisseries, decorative lights and lighting are all considered resistive loads for the purpose of sizing a portable generator. Each device is marked on a nameplate with its power requirements, or the information is supplied in the owners manual or user guide.

Larger motors such as refrigerators, freezers and air conditioners require three to six times the starting watts of the motor.

Total the power requirements for each device the generator will supply, including the starting watts for larger motors, and the sum indicates the generator size required.

*These Sizing Guides are intended for estimating purposes only. Actual power requirements of high demand appliances vary widely by brand, model and capacity. Always have an authorized dealer or qualified electrician analyze your specific requirements before making a purchase decision. 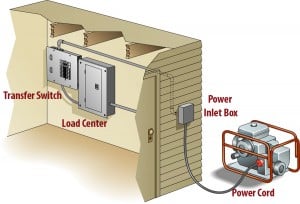 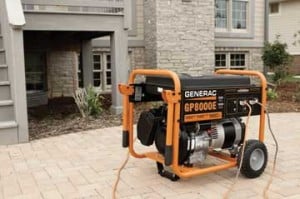 Read Next |>What Will My Portable Generator Run During a Power Outage?