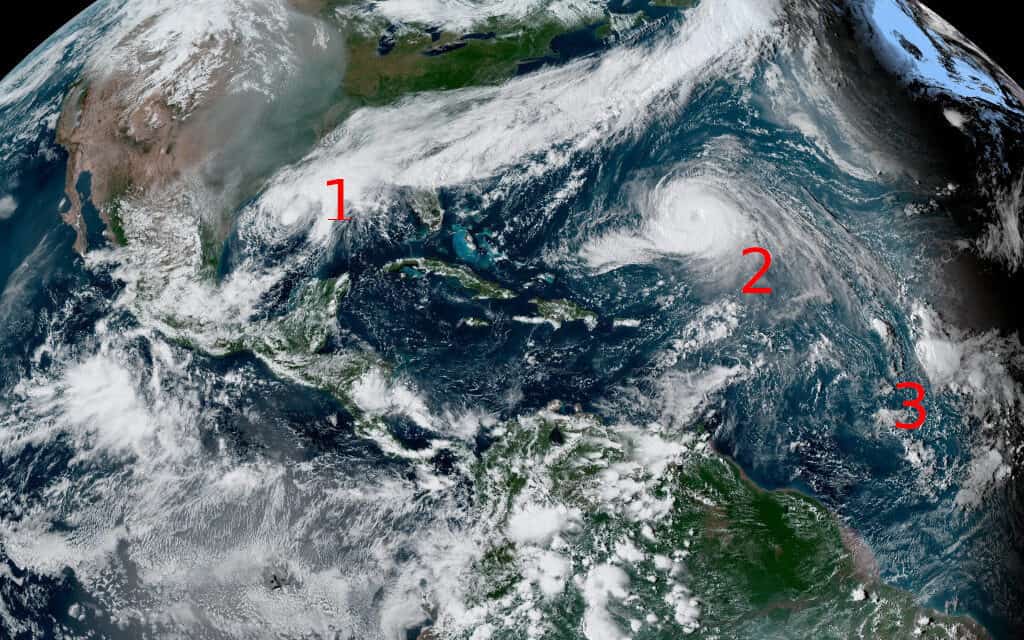 Few seasons on record will match the 2020 Atlantic Hurricane Season. Now that the annual list of tropical cyclone names has been exhausted, The National Hurricane Center will assign Greek alphabet names to the storms. Three new tropical cyclones formed in less than a day over the northeast Atlantic, east tropical Atlantic, and western Gulf of Mexico.

Depression Twenty-Two formed on Thursday September 17 in the western Gulf of Mexico from an area with a low chance of organization. Twenty-Two strengthened to Tropical Storm Beta on Friday. The storm will hit Texas as a strong tropical storm or category 1 hurricane. Just before or shortly after landfall, Beta will weaken and meander along the coast to Louisiana as a tropical storm and later a depression.

Storm Surge, Hurricane, and Tropical Storm warnings and watches are in effect for the entire coast of Texas and parts of Louisiana. Beta is a slow-moving storm and will produce storm surge and heavy rain over a long period. Flash flooding, coastal flooding, and inland flooding are expected within the warning and watch areas. Texas and Louisiana coastal residents and businesses should hurry preparations and act on their hurricane preparedness plan.

Tropical Storm Alpha formed near the Coast of Portugal on Friday and was forecast to move inland. Short-lived Alpha had some tropical characteristics but was mainly a sub-tropical system with tropical-storm-force winds. Alpha dissipated to a remnant low over Portugal less than 12 hours after it formed and the National Hurricane Center issued the last advisory on Alpha at 3:00 AM GMT, Saturday September 19.

Tropical Storm Wilfred formed out of an area of interest in the east tropical Atlantic that had a moderate 40 percent chance of development on Thursday the 17th. Wind shear prevents the storm from intensifying as it moves west-northwest for the next 36 hours. Drier and more stable air ahead further prevents strengthening. Wilfred presently poses no threat to land and will probably dissipate by Tuesday or Wednesday.

Life-threatening storm surge and hurricane-force winds are
possible along the Texas coast early next week. Storm Surge and Hurricane Watches are in effect, and residents in these areas should ensure they have a hurricane plan in place and follow advice given by local officials. pic.twitter.com/7LsnMx0ALV

With the naming of Subtropical Storm #Alpha, we've officially entered the Greek Alphabet for named Atlantic storms this year.
We've made it as far as Zeta one time on record, in 2005. 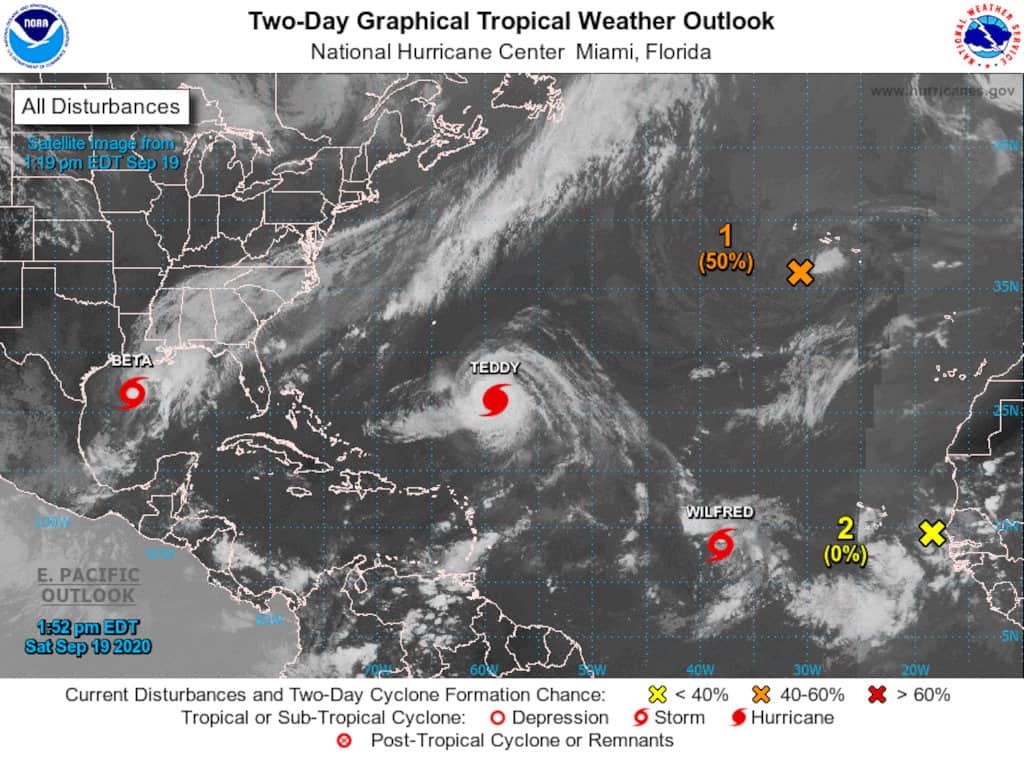 The two-Day Outlook for the Atlantic showing Beta, Teddy, and Wilfred plus the Post-Tropical Cyclone Paulette (1) and another area wil 0 percent chance of development. National Hurricane Center Graphic

The system that was once Hurricane Paulette has moved south of the Azores toward warmer ocean water. It may slow or stall as it reaches conditions favorable for development. Hurricane Paulette made a direct hit on Bermuda last week before moving north and then east. Now a post-tropical cyclone, Paulette has a 50 to 60 percent chance of reforming as a depression or tropical storm over the next five days.

Meanwhile, a tropical wave is located off the coast of Africa near the Cape Verde islands. Although this system once had a small chance of organization, the National Hurricane Center no longer expects development for the foreseeable future and gives it a zero chance of development over the next five days.

Wilfred is currently forecast to turn to the northeast of the Leeward Islands next week, but interests on the islands should continue to monitor its progress.https://t.co/fRK9zqH5W2 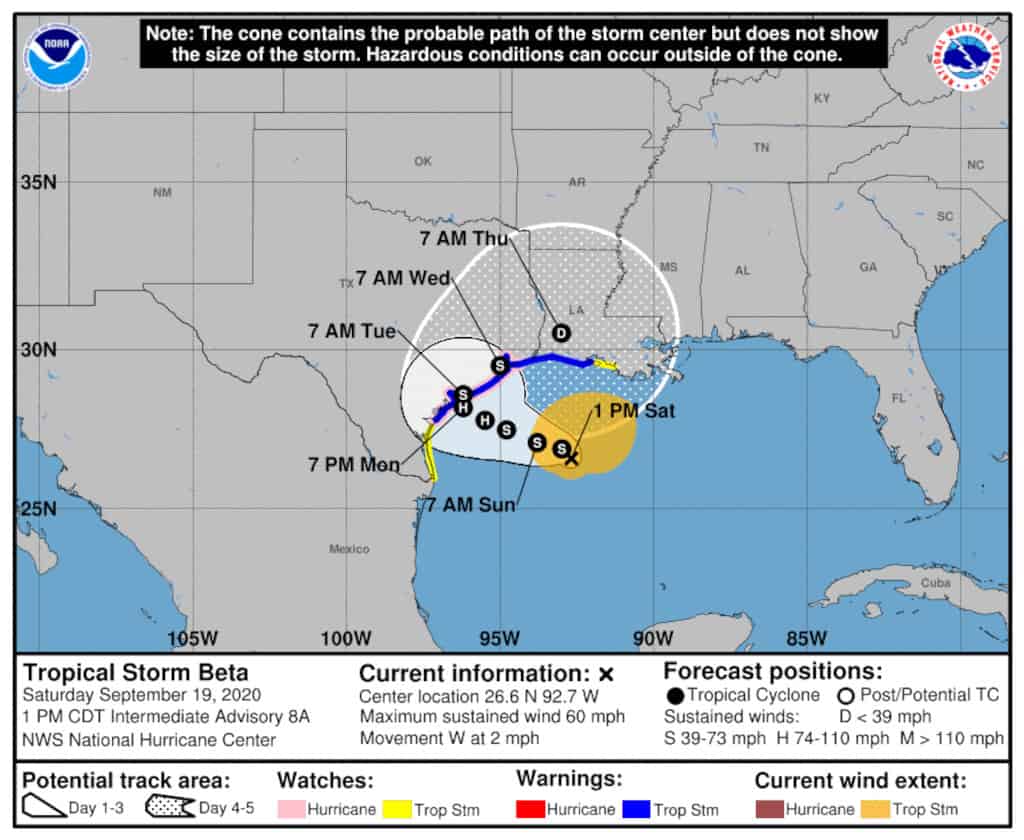 Hurricane Teddy has 120 MPH sustained winds and much stronger gusts. As it moves east of Bermuda Late Sunday or early Monday, the island will experience tropical storm conditions including strong winds and heavy surf. Heavy seas will spread across the Caribbean and East Coast. After passing Bermuda, Teddy will transition to a powerful post tropical cyclone on its way to Atlantic Canada. Teddy’s impacts include flash flooding, storm surge, high wind, and heavy rain with hurricane force winds for northeast Nova Scotia and Newfoundland.

The 2020 hurricane season is far ahead of the historic 2005 season which saw a total of 28 named storms including Hurricane Katrina. On this date in 2005, Hurricane Rita was the seventeenth named storm to have formed. So far, 2020 has produced 24 tropical cyclones with 23 named storms (six more than 2005,) eight hurricanes, and two major hurricanes. With normal to above normal activity forecast for the next two weeks, it is not inconceivable that 2020 could make the history books as the most active season in history. 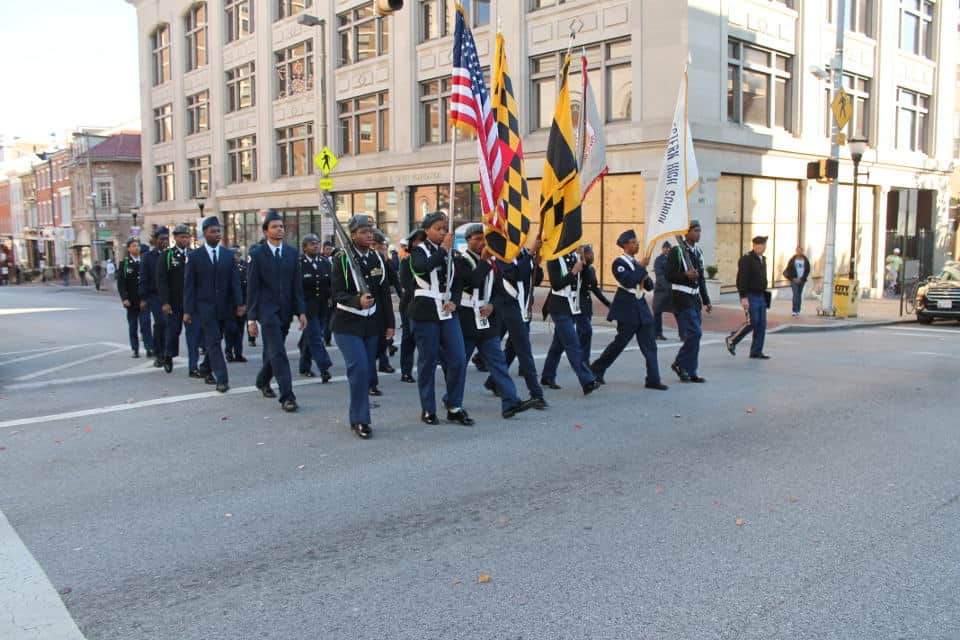 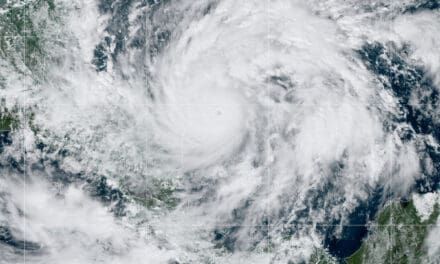