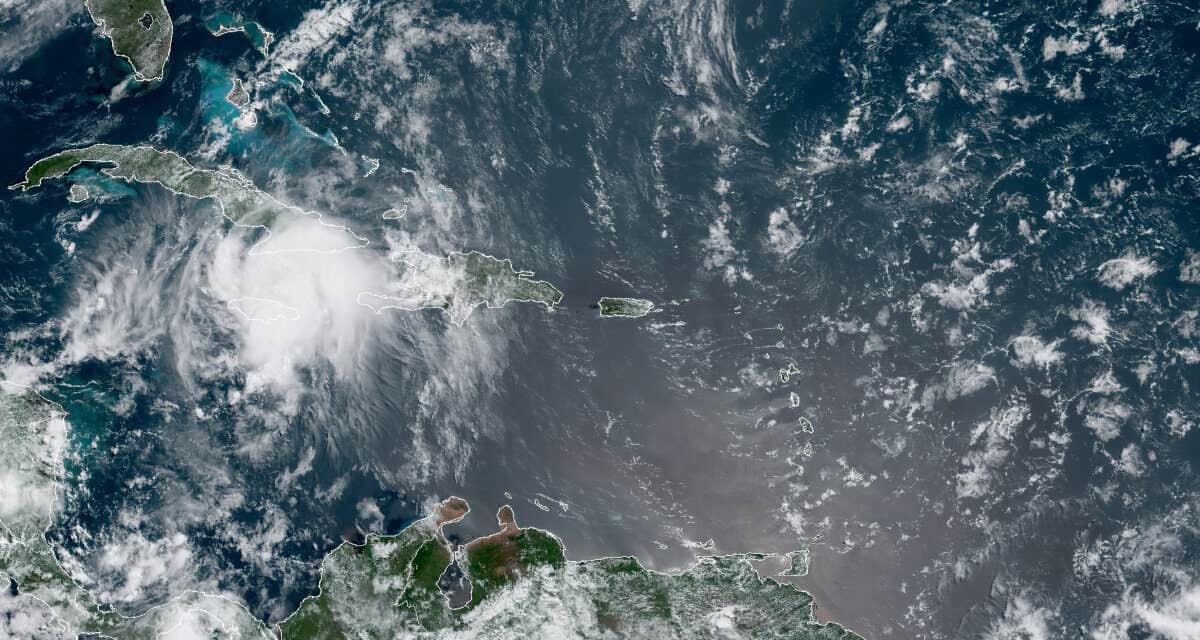 After crossing the Florida Keys on July 6 as a tropical storm, Elsa began to strengthen and Hurricane Watches were issued for portions of the Florida Gulf Coast. A Hurricane Warning was issued in the 2:00 PM EDT public advisory and tropical storm watches issued for the Georgia and South Carolina Coast. Public Advisory 27A at 8:00 PM EDT upgraded Elsa to a hurricane with 75 MPH winds, a category 1 hurricane. Four hours later, the winds decreased to 70 MPH and Elsa was again classified a tropical storm.

Tropical Storm Elsa is currently over Raleigh, North Carolina with 45 MPH winds on a path through Virgina, Maryland, Delaware, and New Jersey. tropical Storm warnings are in effect along the East Coast from North Carolina to the Maine border. The threat of heavy rain and flash flooding continues.

Athorities in Florida and the Caribbean blame Elsa for at least four fatalities.

Update July 4, 2021: With wind speeds just below hurricane force, Elsa has slowed to 13 MPH, a speed consistent with most tropical cyclones. The storm has turned more northwest on a path to cross Cuba tomorrow morning into the evening. A tropical storm warning is in effect for  much of Cuba and the Florida Keys. New watches  issued overnight affect the southwest coast of Florida. Florida Keys residents should expect conditions to deteriorate tomorrow. Expect more warnings and watches for the Florida Gulf Coast.

Elsa remains a strong storm and will bring storm surge, flooding, power outages, and heavy rain to the FLorida Keys and The Peninsula of Florida. Florida residents should monitor the storm and follow the advice local officials.

Update July 3, 2021: The NHC has downgraded Elsa to a Tropical Storm with 70 MPH sustained winds. A hurricane warning remains in effect for portions of Haiti. A Tropical Storm Watch and a Storm Surge Watch is in effect for the Florida Keys. Additional watches and warnings are expected later today and tomorrow.

Hurricane Elsa is the fifth named storm of the 2021 Atlantic Hurricane Season and the fifth tropical cyclone in the month of June. It became Tropical Depression Five on June 30, 2021. It intensified quickly and became a hurricane just one day after becoming a tropical storm.

The forecast storm track on Thursday morning took the storm through the Caribbean to Cuba and then north into the Gulf of Mexico with a possible landfall in the Florida Keys early Tuesday morning (July 6). The NHC did not mention further development to a hurricane but added the possibility for additional strengthening to the 11 AM advisory. 12 hours later, Elsa began to intensify.

In Advisory 8 on Friday morning, July 2, the NHC upgraded Elsa to a Hurricane with 75 MPH winds. Hurricane Warnings were issued for the Lessor Antilles. Possible landfalls included Cuba on Sunday, the Florida Keys on Tuesday, and the Florida Peninsula on Wednesday.

Elsa is currently (5 PM AST, Friday July 2) a Category 1 Hurricane with 85 MPH sustained winds gusting to 105 MPH. Hurricane Warnings are in effect for Jamaica, the Dominican Republic, and Haiti. Hurricane Watches are in effect for portions of Cuba. Additional warnings and watches will be issued as the tropical cyclone travels northwest at 30 MPH.

Here are the 5pm AST Key Message for Hurricane #Elsa now located in the eastern Caribbean Sea. New hurricane watches and warnings have been issued for portions of Cuba and Jamaica.

The 2020 Hurricane Season was the most active on record. The NHC named Tropical Storm Edouard on July 6, 2020 and set the record for the earilest “E” named storm on record. Hurricane Elsa broke Edouards record this morning. 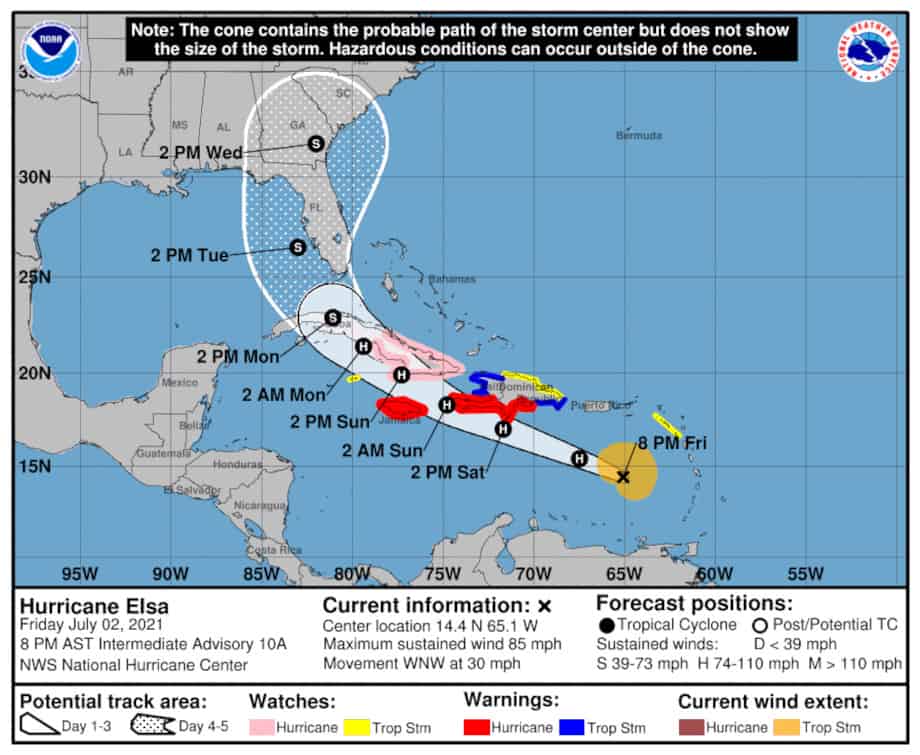 Hurricane Elsa is tracking through the Caribbean Sea. It will cross Cuba on Sunday and Monday, hit the Florida Keys on Tuesday, and the Florida Peninsula Late Tuesday or Early Wednesday. NOAA NHC Forecast Graphic.

Hurricane Elsa will lose strength as it crosses Cuba. If the storm track through the Caribbean stays closer to land, Elsa may lose strength sooner and become a tropical storm before it landfalls in Cuba. A shift to the north in the next day could move it across Hispaniola instead of passing by, and the storm could weaken before reaching Jamaica and Cuba.

When it emerges from Cuba into the warm waters of the Straits of Florida, it could regain strength and become a hurricane again. The Florida Keys, and Key West in particular, are within the current track. As it passes the Keys, Elsa should turn north and then north by northeast. A second U.S. landfall could take place near St. Petersburg and Tampa as a strong tropical storm or hurricane.

After landfall on the Florida Peninsula, it could reach Georgia and South Carolina as a tropical storm.

#Elsa has been the 1st tropical system of the season to have #ThatLook -- and today it's the 1st time we've ever seen this --a #hurricane in the #satellite era (1960s-present) to form this far east/south (tropical Atlantic) so early in the season pic.twitter.com/7EZJwe9tQj

Did you know? A Standby Generator can start and run in virtually any weather—automatically. Even during a hurricane. They don’t care about wind or rain. Day or night, seconds after the power goes out, the generator starts and restores power to the house or business. Automatically.  And they can supply your entire home, including multiple air conditioners.