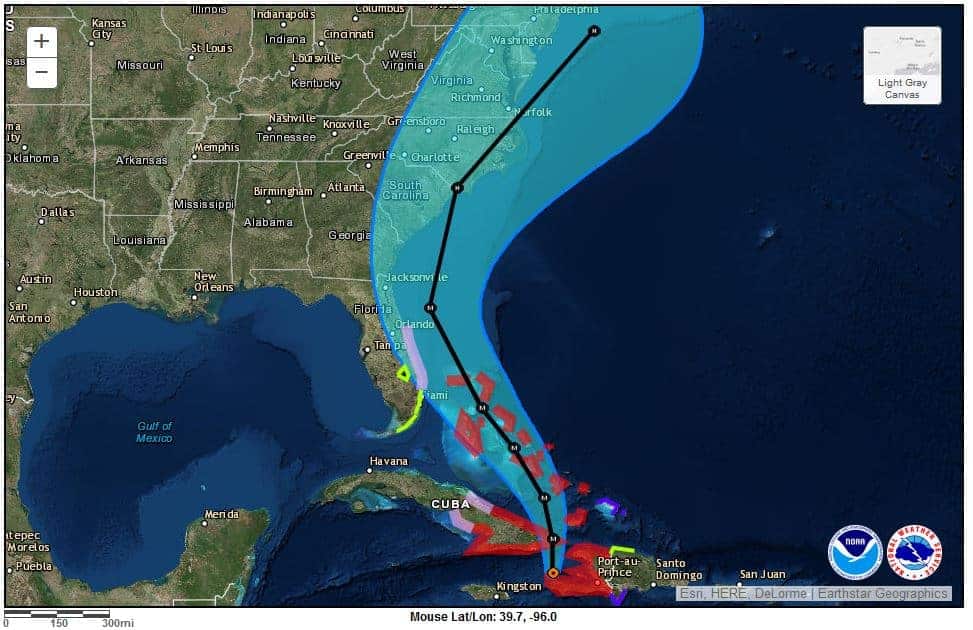 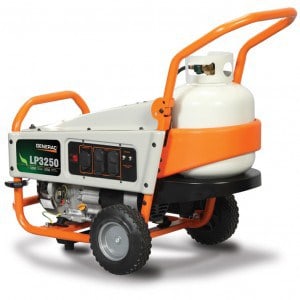 Meanwhile, the death toll continues to rise as at least 23 deaths were attributed to Matthew. Remember to follow all safety rules when using portable generators. Never use a generator or any machine powered by an engine indoors. Keep generators at least 10 feet from the home and away from any doors, windows, or vents.

Authorities remind residents to beware of unlicensed contractors. Check licenses and insurance before hiring anyone.

Beware of flooded roads that could hide other hazards. It only takes inches of fast-moving water to wash your car away. Flooding remains a concern in many areas and especially along rivers and other waterways. Evacuations of residents from rooftops were still taking place on Monday. 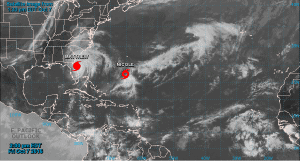 Hurricane Matthew brushes along the coast of Florida as it heads north.

Nearly 1 million Florida residents are without electrical power and Gov. Rick Scott warns that the storm is still causing outages. If you are using a portable generator for emergency backup power, remember to follow safe practices and keep the generator at least 10 to 20 feet away from your home. Stay away from downed power lines as many are live and present a serious, life threatening danger.

Hurricane Matthew continues to travel northward and is brushing the Florida coast on its way toward Georgia and South Carolina. Although gradually weakening, it is still a dangerous category three storm packing winds of 120 MPH. 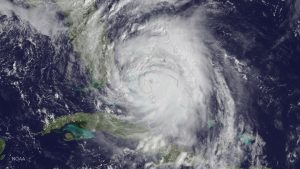 Scroll Down for Evacuation Routes and Online Resources.

Storm surge for most of the coastline is expected to reach 3 to 10 feet.

The NOAA advises that if you are within the Hurricane Warning Area, do not leave the safety of your home unless instructed by officials to evacuate. The winds are deadly and carry debris that could severely injure or kill. If you are within the watch area, pack up your pets, medicines, the deed to your home, and other emergency items and get out.

Matthew is expected to remain a category 3 cyclone or perhaps strengthen to category 4 before it reaches Florida. Evacuation efforts are under way in Florida, Islands off the Georgia Coast, and South Carolina.

Storm surge, which is the most dangerous hazard of a tropical cyclone, may peak at eight feet if it coincides with the high tide. Coupled with high surf conditions it can bring deadly flooding in just moments. If you are in a coastal evacuation zone, leave as soon as possible.

Changes to Watches and Warnings 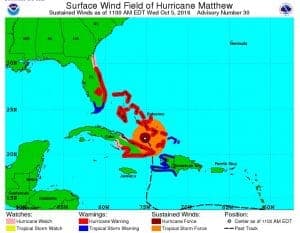 Hurricane Matthew continues to bear down on the Atlantic coastline and will affect Florida, Georgia, South Carolina, and North Carolina. Hurricane warnings are issued for Florida and states further up the coast will follow. Matthew will reach Florida as a dangerous category 3 or category 4 hurricane. A State of Emergency exists from Florida to North Carolina and Evacuation Orders are given in all four states. Gasoline supplies are dwindling and some stations have already run out of fuel.
Schools are closing and events are canceled.

Hurricane Warning – The storm is approaching within 24 to 48 hours

Hurricane Watch – The storm is expected within 48 to 72 hours

(Note: As Matthew progresses up the coast, watch areas are likely to become warning areas.)

Do not delay. If you are in an evacuation area, make any last minute preparations quickly. Take your families and pets, and leave.
As the storm reaches the coast, the National Hurricane Center will issue additional warnings and watches. Listen to local radio and television and government emergency websites for up-to-date information. 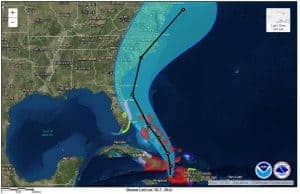 Florida governor Rick Scott declared a State of Emergency on Monday for the entire state of Florida in order to start emergency preparations. Matthew is currently a powerful and dangerous Category 4 hurricane with sustained winds of 145 MPH and gusts to 175 MPH. This storm will likely brush by the Florida Coast as a Major Hurricane.

Residents along the Florida Atlantic Coast and inland from the coast should prepare for the arrival of the storm within the next 48 hours.

This page will be updated as further information becomes available.

Warning: Hurricane Matthew is a powerful and dangerous hurricane with winds as high as 175 MPH. It will likely reach Florida as a Category 4 or very strong Category 3 storm. If you live in the watch area, make plans to leave before the storm arrives.

Tropical storm conditions are likely to spread over the Florida watch area early on Thursday. Hurricane conditions become very likely late Thursday and will continue through Friday as Matthew moves north along the coast. Additional watches and warning are probable.

Governor Scott signed the executive order declaring the State of Emergency in order to make resources available. Residents should put their emergency preparedness plan into effect.

Prepare for the arrival of the hurricane now:

If you live in an area where evacuations are likely, prepare and leave in advance of the evacuation to avoid delays and clogged roads. 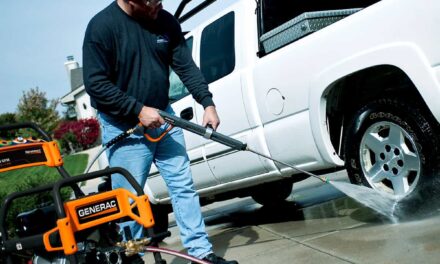 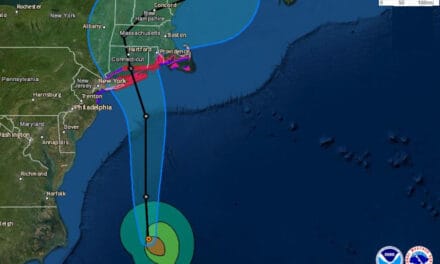 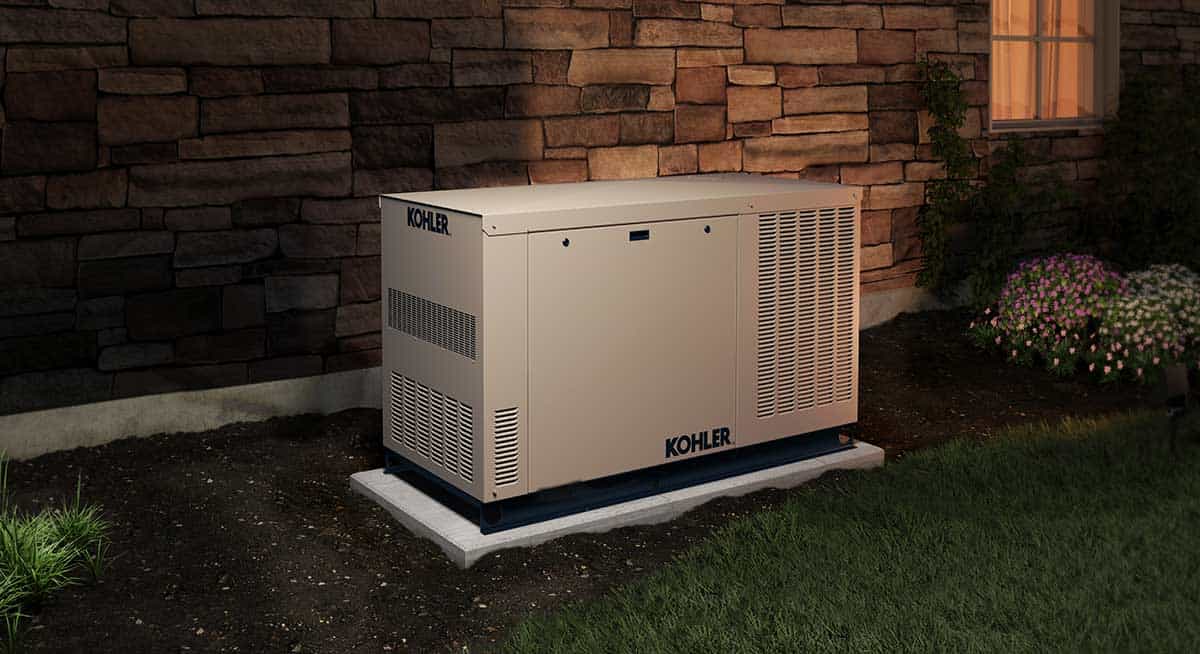